Grand Bend joins many other Ontario communities who have installed the welcoming symbol. 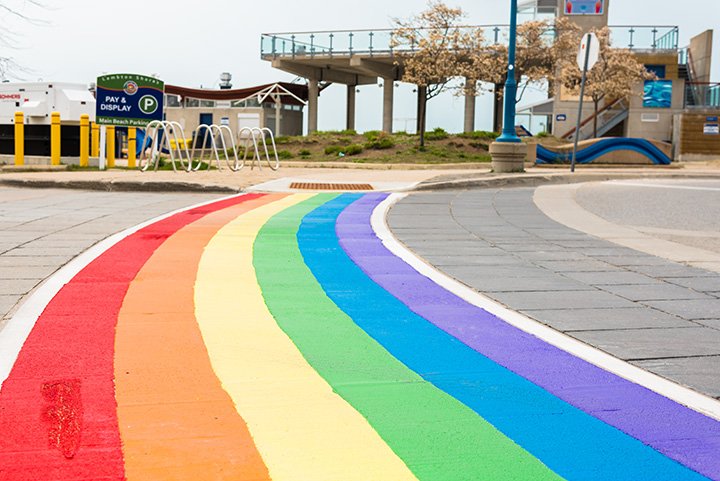 Grand Bend joins over 30 other communities in Ontario and many more throughout Canada and the world that have installed a rainbow crosswalk on municipal property.

“As a symbol of diversity and inclusion within Lambton Shores, a rainbow crosswalk is now a permanent feature in the heart of Grand Bend.” Mayor Weber said in a tweet earlier this week.

The rainbow is a symbol of pride within the LGBTQ+ community but it also represents acceptance, equality and a show of solidarity by allies of the community.

A rainbow crosswalk has come to symbolize the message: you are welcome here, you are safe here to residents and visitors alike.

The crosswalk was the brainchild of the affirming team at Huron Shores United Church.

The church presented the idea to council in 2020. After being put to a vote the idea was quickly approved.

COVID-19 and winter weather delayed the project until now.

Wilma Harris, Co-chair of Huron Shores United Church’s worship team and member of the affirming team, said she was given an approximate date but drove to the site from Port Franks each week in anticipation of seeing if the rainbow had been painted.

“Finally, last Friday there they were painting. I was so excited,” she said.

The location of the crosswalk was chosen by council but Harris is pleased with their decision.

“The fact that this particular sidewalk is an arch made it even more special,” she said.

In 2013 the church became a member of Affirm United. The nation-wide program supports and promotes the acceptance, justice and inclusivity of all people regardless of gender or sexual orientation.

As part of the process of becoming members the church spent several years educating themselves and their parishioners about how to be welcoming and more accepting particularly towards members of the LGBTQ+ community, a lot of whom, Harris said, don’t feel safe.

After membership was approved the church’s council appointed five members to an affirming team.

The team began thinking of ways to promote inclusivity.

The team has new dreams for the community and future initiatives and programs are already being planned but many have been put on hold due to COVID-19.